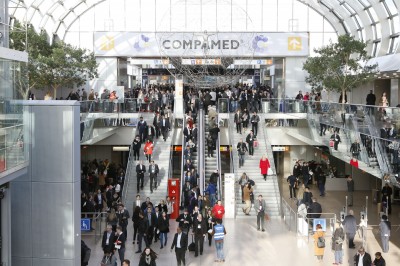 Last November, between the 13th and the 16th, the Trade Fair MEDICA / COMPAMED 2017 took place in Dusseldorf, the largest world event in the medical sector, and brought together all the specialized companies in the sector.

As in recent years, Innovamed has participated as an exhibitor, within the joint stand organized by Cambra de Comerç de Barcelona with the collaboration of ACCIÓ in the pavilion 8B of COMPAMED.

During this event, Innovamed had the opportunity to take part in several of the organized events, such as the Brokerage Event 2017, as well as in different Benchmarking events organized in the stands of the countries represented.

All this has allowed to increase the network of international contacts while integrating as a future collaborator in specific projects for the development of new Medical Devices. About 65 contacts have been opened in 8 countries.

Innovaned considers ​​the results obtained very positively and hopes that these projects will be consolidated in the coming months. Innovamed also wants to thank Cambra de Comerç de Barcelona and ACCIÓ for the opportunity to be part of such an important event.

We use our own and third-party cookies for analytical and technical purposes, processing data necessary to create profiles based on your browsing habits. You can get more information and set your preferences from 'Cookie settings'.